The Annual Funding Disbursement (AFD) policy of the Global Fund requires UNDP Country Offices (COs)/Principal Recipients (PRs) to submit Disbursement Requests (DRs) annually in February. These must be supported by a detailed cash forecast for annual disbursement plus a buffer period. Based on the review of the DR, the Global Fund issues to the CO/PR a Management Letter detailing the calculation of the AFD approved amounts and the schedule for the cash transfers. The cash transfers can either be (1) in one tranche for grants with an annual budget of $3 million or less or (2) in phased cash transfers for grants with annual budgets over $3 million. Below is an example of a disbursement decision with phase cash transfers. 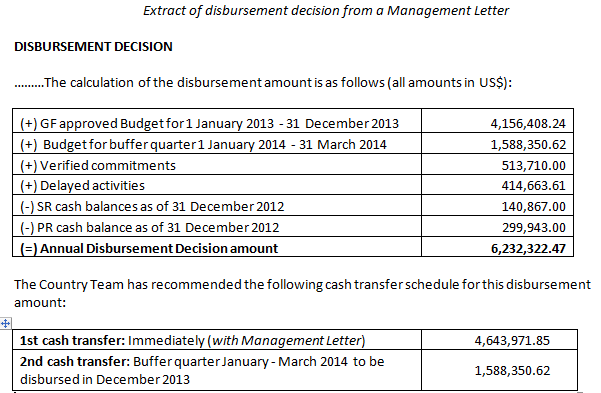 Cash transfers are recognized as revenue only in the fiscal year in which they are programmed for use. In this respect, cash transfers for the buffer periods are recorded as ‘deferred income’.

To ensure proper recording, the amount of disbursement related to either the current year or the buffer for the next year will have to be specified in the Notification of Grant Disbursement or the Management Letter sent by the Global Fund. For example, the disbursement decision presented above will be recorded as revenue of $4,643,971.85 and the buffer amount of $1,588,350.62 will be recorded as Deferred Income in 2013.

A/C 24006 (Funds Received in Advance account) has been included in the Donor Report. Hence disbursements received for the year (current plus next year’s funding) will be reflected. The “Deferred Income” has been included under the “Receivables” column in the Donor Report. “Receivables” as (+) and “Deferred Income” as (-). It is the responsibility of the CO to monitor the balances in the “Deferred Income” General Ledger (GL) Account. The Global Fund Partnership Team will be sharing with the CO the periodic report summarizing the balance in the A/C 24006. 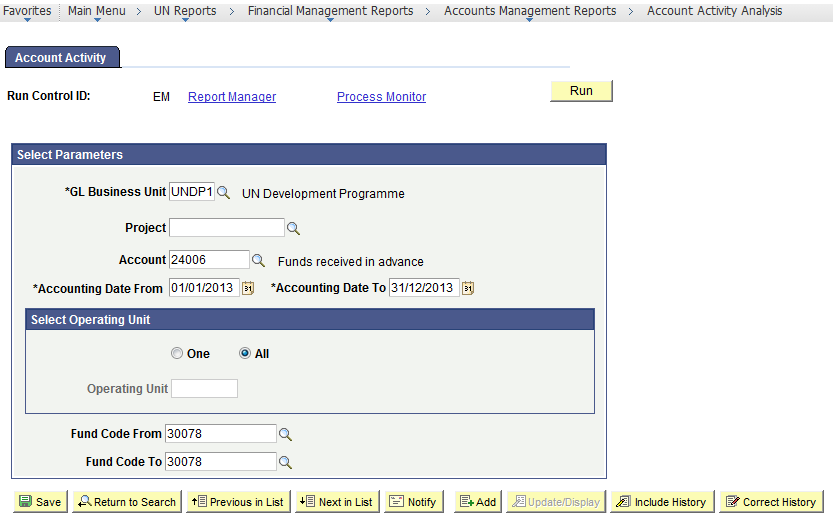 In the section on “Explanation of Terms,” receivables are defined as “amounts due from donors, but which have not yet been paid (i.e. past due), according to dates in the schedule of payments from signed agreements.” Global Fund grants do not have amounts due from the donor but would instead have Deferred Income. To ensure proper recording of revenue, disbursements from the Global Fund are recognized as revenue only in the fiscal year in which they are programmed to be used and funds for the buffer periods that relate to subsequent fiscal year are recorded as “Deferred Income”. The “Deferred Income” will be included under the “Receivables” column in the Certified Financial Reports (CFRs) as a credit balance, since these are funds received in the year of reporting but pertain to the next year’s funding.